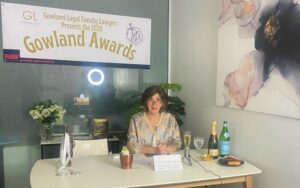 Our Fifth Annual Gowland Awards was another successful night, despite looking a little different this year on Zoom! Although this year the night was over Zoom not in Parliament House, our message was the same.

Each year we award the Gold Gowland to a domestic abuse service that has nominated a survivor’s Act of Client Resistance. This Award honours, recognises the strength of all survivors across Australia.

This year’s winner is Women’s Safety NSW who nominated a young Aboriginal woman for her perseverance in seeking justice against the abuser whilst protecting herself and her young child.

Normally, this award would go to a public figure who has tirelessly advocated for domestic abuse prevention and reform. This year it was not presented due to our shortened format over Zoom. Previous winners of the Excellence in Domestic Violence Awareness Award have included: Phil Cleary (2019), Jointly, Dr Julia Baird and Hayley Gleeson (2018) and Rebecca Gibney (2017) .

The Awards are also an opportunity to call out those who deny, trivialise, and blame the victims of domestic abuse. There was, unfortunately, no shortage of nominations this year! The winning losers were voted on by our guests.

We thank all who joined us. We can not wait to have you together again next year, with superior canapes & a glass of bubbly in Parliament House.