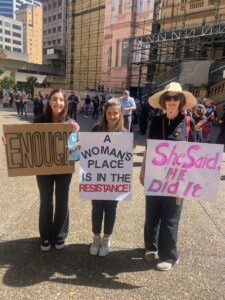 On Monday 15 March 2021, Gowland Legal Family Lawyers joined tens of thousands of women and allies across 40 Australian cities calling for an end to violence against women.

The protests have been called the “biggest uprising of women that Australia has seen”, and come in the wake of recent allegations towards the treatment of women in the highest offices of Australian Parliament.

When asked by 9news why she was marching our Principal Solicitor Lyndal Gowland said she was particularly concerned over the large number of women and children dying from domestic violence.

“Women have been marginalised by the system,” she told 9news.com.au.
“I’m here to get justice for women.”

Women across Australia have had enough. It is time for real change and real justice.

While attending the March 4 Justice Gowland Legal Family Lawyers (& our signs) were photographed and interviewed by several journalists.

You can see part of our Lyndal’s interview, and her sign, on channel nine and on Reuters here:

Gowland Legal are passionate advocates for women and children and are pleased that our messages were taken up globally by Reuters, French 24, Press Club and the Guardian who all asked us for comment on this important issue.